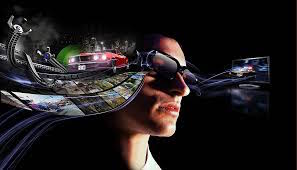 Augmented reality also known as AR technology, is presented as a technology that merges digital content with the real, physical world. This AR technology uses superimposed images onto objects generated by a computer. It augments the already present objects to appear as enhancement. The boundary between the real and simulated world is blurred with the integration of the two worlds. This AR technology has extended to mobile phones, video games and many other applications.

How is Augmented Reality Possible?
Augmented reality experiences created with AR Technology generates enhanced object images using a range of media, such as video, graphics, touch and smell to imitate the objects or surroundings in the real world. It is not based on a fully immersed artificial world and it is near to the real world. However, you need to wear a head mounted display or a pair of 3D glasses smartphone to view a series of images and interact with them for the overall experience. This technology is particularly accessible with mobile phones, such as iPhone that have GPRS to obtain information and overlay with images, videos, etc. superimposed onto the location. Additional handheld devices have sensors, software, digital projector and compass to display images providing augmented reality.

New Technologies
A couple of years ago Microsoft introduced a first generation of Kinect, which was based on Primesense 3d technology. Primesense was later purchased by Apple. More recently a startup named Oculus Rift designed a virtual reality head mounted display. Shortly thereafter Oculus was purchased by Facebook for $2b. Other companies such as Samsung introduced its Gear VR and Sony its Project Morpheus. Lately Microsoft made a strategic announcement regarding their HoloLens  and Google regarding Magic Leap.

Applications of Augmented Reality
Augmented reality offers an immersive experience in a variety of ways. This technology is used for enhanced marketing to engage customers with games, interactive consumer products and on streets. Enhanced maps with real time display in augmented reality provide you with suggestive information. It emphasizes education resources and fully engages the reader with its use to re-create structures of educational models, real time superimposed presentations, regular books into 3D images and historical events. Augmented reality is employed in military, medical and industrial applications to validate the plans and designs. A surgeon can access a live image of a human subject for performing surgery, while a soldier can have detailed 3D maps to obtain surrounding information. Numerous areas make use of this technology to visually superimpose their solutions when in need of crucial information.

Augmented Reality – More Than Meets the Eye
Download A Brochure